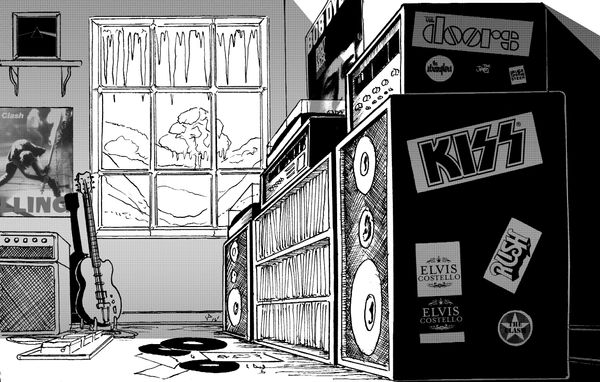 Making noise through the winter nights
That became our Guiding Light

"Why don't we write some songs?" I had moved from the warmth of California to the coldest winter on record in Michigan and I was 2,460 miles from my musical partner and guitar wiz, Rob. We'd been playing music on and off together for a couple of years in the Electric Buddha Band. Maybe you've heard of us? Ok, probably not.

The original idea was we'd write 20 songs, pick the best, throw in a couple of covers and record an album. But why stop there? Why not a concept album? Why not the rock and roll mother lode? Let's make it a Rock Opera!

Never mind the fact that neither Rob nor I knew anything about songwriting or recording. Our only qualification was that we had more than 50 combined years of listening to rock music.

So if we failed to live up to the poignancy and originality of the first rock opera, "S.F. Sorrow" by The Pretty Things (which predated "Tommy" by a year), or the soaring beauty and '70s sheen of Brainpool's epic "Junk," we were certainly inspired by their work. And as a worst-case scenario, we tried to avoid the cut-out bin of history that was KISS's "Music from the Elder," an album with such a troubled production that playing the tracks in random order works better than what's on record. But if KISS could write a rock opera, why not us? Thus began our two-year adventure.

The first song turned out to be rather fortuitous. It began as a creepy R&B bass riff that had kind of a swing to it. Drums were added. Then guitars. And why not a bridge in 5/4 time? Next thing you know I'm writing the words to "The Creeper" and it set the stage for the whole story: a dystopian future, a surveillance government, Rock music is illegal, yada yada yada. Oh yeah, and it's a love story. Because every good story is a love story. It's also a story of friendship and betrayal, death and redemption.

Songs were written riff-by-riff, chord-by-chord in airports, on planes, in hotels. Rob and I were rarely in the same place at the same time, so every instrument, every vocal, every solo was recorded separately, sharing files over the interweb. Lyrics were mostly penned after the fact, but a few songs, like "Self-Made Man," "You're Never Alone", "C'mon Eva!" came out like fully-formed teenagers: slightly awkward, but making a statement.

Other songs nearly died on the drawing table. Rob's fantastic guitar playing transformed "Step Inside My World," "From the Underground," and "Any Road." And he really outdid himself on "Escape from Mars." It's one of my favorite songs. The lead guitar was recorded in one epic take. It's probably Rob's favorite also, since he didn’t have to sing. The only thing Rob hates more than singing is when I tell him I've written another song. Often, I feel the same way.

The songs form a cohesive whole, musically and lyrically. You'll hear musical motifs repeated from a chorus here to a bridge there, or in my same-old-same pentatonic solo re-used time and again. There are so many classic rock tributes: the count-in, the I-IV-V chords of Louie Louie, the twin guitar solo, fuzz tone, flangers, phase shifters, backwards guitar parts, Bo Diddley drum beats, B3 Organs, harmony vocals, theremin, french horn, strings, sound effects and, of course, more cowbell! Anyone who grew up listening to classic rock will find dozens of musical and lyrical references, some quite obscure. I don't even think Rob has discovered them all.

Once the lyrics were written, we began the even more difficult task of recording vocals. We were fortunate to pull in some actually talented people into the process including Rick, Ruby, Louise and Brianna. We had mixing help from Miles Fender of Streetlight Farms Studio who made us sound much better than we would have otherwise. He didn't just slap a little reverb on things. Sometimes, he had to put a ton of reverb. Oh and we got the Western European Symphony Orchestra of Lisbon to record one of our songs. I'm not even sure how that was possible. But you gotta admit, it's kind of cool.

In the end, we surprised ourselves. Maybe we'll surprise you, too.

It's a force we can't control
Listen to the Underground Radio!